You are here: Home > News > Tote bags and stitched pictures 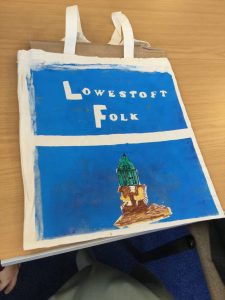 This week, there was great excitement as the residents ripped the masking tape and letters off their bags, to reveal the beautiful patterns underneath; they all declared they were very pleased with the result and the children were well impressed.

Whilst at the Maritime Museum the previous week, the children drew some of the folk art in the collections, and next it was their turn to show those drawings to the residents and explain some of the stories behind them.

One item that particularly fascinated them was the number of embroidered pictures of ships, set within a circular, ‘life buoy’ frame; many of these pictures were made by prisoners of war, using fibres taken from their uniforms and those of their prison guards.

Inspired by both the children’s drawings and photographs of other examples of embroidered pictures, the group then worked in pairs to make their own stitched seascape pictures. And as they did, they chatted and laughed and the room buzzed with activity and enjoyment – it was a very, very lovely session.