You are here: Home > News > An imaginary scrapbook, postcards and wishes

Oh, what a joy to be back at Britten Court.

Two years ago, we paused all face-to-face Special Delivery sessions with residential care homes, so it was lovely to be back at Britten Court last week, where we could actually meet the residents and chat directly with them.

Hopefully, we’ll be able to visit with the children later in the summer, but for now it’s just the artists going in to work with Julie, the activity co-ordinator, and other staff.

On this occasion, it was poet Dean Parkin who led the session, by the end of which we had come up with a splendid ‘Imaginary Scrapbook’ into which we pasted objects, photos, feelings – and a lot of love.

Pat puts in a picture of Toby, her well-behaved and much-loved Labrador.

Stan adds the blue of his uniform, the roar of the aircraft, and the weight of the rifle on his shoulder, as he patrolled the perimeter fence.

Maureen puts in her grandfather’s riding crop and spurs from WWI; they put them up on the wall when he came to live with them.

Audrey chooses a photo of her grandson, his face covered with chocolate.

Martin makes bus routes sound like poetry; he pastes in a timetable and the advice he was given; ‘You have to slow down to get there on time’.

Marlene remembers the errands she ran (and the walk from Pakefield to Kessingland) and pops in a shopping list for two bags of sugar and some butter.

‘My dad was in the RAF, he did good things,’ says Chris and in goes a photo of him, complete with his pilot’s cap.

Rodney wants a football programme, preferably from the Bobby Robson testimonial match, and that takes Julie back to her days at Carrow Road, sitting in the stands in her special black top.

Abbie wants her teddy in there, the one called cat that Dad gave her on the day that she was born, and Rachael slips in Lloyd, the teddy from the pharmacy; he’s only got one arm now and he’s been with her all her life.

And then it was over to Roman Hill, where the children discussed different formats for sending messages, from Morse code and voice chat to parcel post and pebble writing. 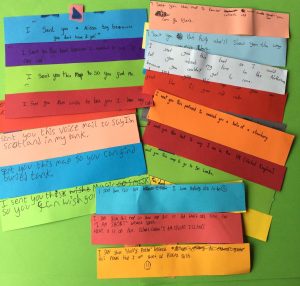