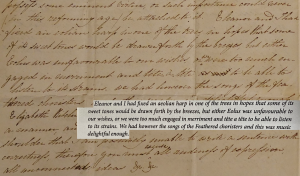 The Lincolnes were prolific letter writers and their use of the English language was gloriously descriptive and creative, as in the ‘Feathered choristers’ in the excerpt above.

Taking his lead from there, artist Alex Jeffery invited the children to write about what makes a home for them, by describing the sights, sounds, smells, tastes and comforts of home – in just two words.

They then folded these poems up into letters, just as the Lincolnes would have done, ready to send to residents at Beech House.

However, Caitlin had other ideas and, after a brief discussion about envelopes and the important role they played in concealing the contents of a letter, she introduced the children to the concept of ‘doodling to music’.

Using a selection of music, the children drew scrolling patterns and sweeping lines – as one child commented afterwards, ‘It made me feel really free’ whilst another one said ‘It was powerful’.

Once completed, the group artfully folded the huge pieces of paper into envelopes, into which they slipped their folded letters.

And now, I am on my way to deliver them all to residents at Beech House, along with a recording of each child, reading her poem and an activity pack for the adults to guide them through a similar activity.